Congratulations to Joe who was selected as our Stage 3 representative for this year’s Board of Studies Write On competition. Using the image stimulus below students had to write an imaginative, persuasive or informative text no greater than 500 words. Well done to everyone who completed an entry. Joe’s story, Rough Edges can be found below. 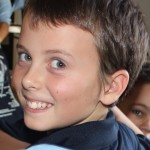 “I can’t see, let me through, I want to see!” I squirm through the crowd trying to catch a glimpse of the miraculous machine! The soft sand of the beach filled my shoes and all the shouting blocked out what the man was saying! More people gathered and shuffled making it harder for me to see. I tried to climb up someone’s jacket only to be thrown off, landing in the sand firmly. 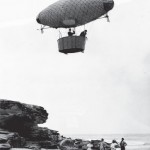 After failing several different ideas I tried to move towards the road so I could climb up those rocks and get a better view. I climbed about half way up one of the rocks facing west and stared endlessly at the massive object. It was like a plane except it was slower and more appealing… it was amazing!

It paraded around in circles for hours and surprisingly nobody left. In fact more people came every minute! It was spectacular, it glided through the sky effortlessly. Flying higher and higher it became impossible to hear the man. He was shouting something but the object drifted too high. After a few minutes the aircraft floated so high it was merely a spot in the clouded sky.

The tiny silhouette in the sky drifted higher and higher although it would drop a few metres every now and then and people would gasp and hold themselves hoping that the men wouldn’t fall out. There was a loud whistling sound as one of the parts of the aircraft fell and stuck upright in the sandy shallows of the waves. The people where astonished and looked up to see what would happen next and surely enough they did. The aircraft jolted to the right and spun wildly in the air.

The wild struggle to stabilize the aircraft was intense. It twirled around and spun dangerously, but after a while they held it still only to be thrown around inside while it started spinning again. The people below covered their eyes not able to watch what could happen next.

The aircraft spun like a merry-go-round as it became larger the closer it came to the ground. One of the men climbed up on to the edge of the basket like carrier as the other one hung on for dear life. The aircraft crashed to the ground just after the man on the edge jumped out. The other was not so lucky and was crushed under the massive weight of the aircraft, his limp body partially covered by the large plastic balloon. People fled in horror while some stayed and looked at the horrific sight with astonished eyes and gaping mouths.

As I knelt beside the wreckage the crowd began to disperse. I felt hot tears trickle down my face. That was the last time I would ever be with my brother at the beach.